How This ‘Secret’ Unlocks a $23 Million Difference

When it comes to real estate investing, the mistake many people make - and the most common error I see repeatedly in my 30 years in the market – is that they simply sell too soon.

Investors in other asset classes are often the same: they accept immediate gains in lieu of long-term returns. Have you ever known someone who was offered a retirement package of a single lump sum, OR an annual payment instead? I have, and many have taken the single upfront payment.

A bird in the hand, right? My father didn’t.

Retiring at 57 years old, and living until nearly 94, he received an annual pension equal to 75% of his yearly salary, indexed for inflation.

He lived a fabulous and healthy 37-year retirement never having to worry about money for him and my mother. Consider Captain Peter G in Hong Kong (from a major airline). He was offered early retirement from the airline, and accepted a lump sum.

It ‘seemed a lot’ at the time, and his thought was, I don’t know how long I will live, best to get the money NOW, and invest the whole amount. Sadly most of that is gone through poor investment decisions, chasing quick returns, buying luxury items, and not helped - to be fair - by two divorces.

My point is the money has gone.

But some American baseball stars sure have got it right. They have each taken a yearly stipend in lieu of cash up front. What a wise decision!

Bobby Bonilla: A second deferred-contract plan with the Mets and Orioles pays him $500,000 a year for 25 years. Those payments began in 2004.

• Max Scherzer: Will receive $105 million total from the Nationals that will be paid out through 2028.

• Bruce Sutter: Signed a deal with the Braves before the 1985 season with deferred money. He was to be paid $750,000 per year while with the Braves, then for 30 years after he retired, he'd receive at least $1.12 million per year.

Bobby Bonilla got it right. Why?

Back in 2000, the Mets agreed to buy out the remaining $5.9 million on Bonilla's contract.

However, for whatever reason, instead of a lump sum payment of $5.9 million, they agreed -providing he delayed taking any payment for 11 years- to make annual payments for 25 years, including an agreed 8% interest.

Remember what I said at the very beginning of this article?

“Investors in other asset classes are often the same: they accept immediate gains in lieu of long-term returns.”

Would YOU have waited 11 years?

OR would you have taken the $5.9 million up front?

But the deal apparently was that for the first 11 years his payout pool would grow 8% each year, before the payments started. And he’d earn that extra 8% for each payment afterward.

That’s why in New York, July 1 is known as “Bobby Bonilla Day.”

But the reason Bonilla’s money grew so much each year was because he understood -or was advised about- the magic of compounding. And every serious investor should understand it too.

He got an agreed 8% interest rate. And if you ever needed a reason to consider a long term property investment this should be it.

The Most Powerful Force in the World

Albert Einstein called compounding the “most powerful force in the world.”

Warren Buffett says “My wealth has come from a combination of living in America, some lucky genes, and compound interest.”

The secret to compound interest is of course time. But it is never too late to start.

But of course, the sooner you start, the better.

The longer you leave it, the more the growth explodes.

And because of the ‘magic’ of compound interest, and OPM, and gearing, real estate is the most suitable to enjoy the benefits of compounding.

The biggest mistake I see is investors ‘selling GOOD real estate too soon?’

Just look at the chart below… It shows the value of an account growing at 9% per year over 45 years.

This chart shows the true power of compound interest over time. 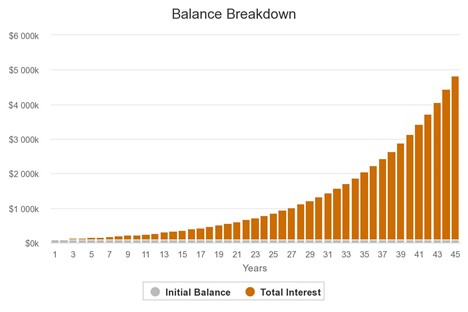 The longer it goes on the greater the benefit.

But you probably don’t have 45 years to wait for your investments. (But maybe you could put $10,000 away for your children?) 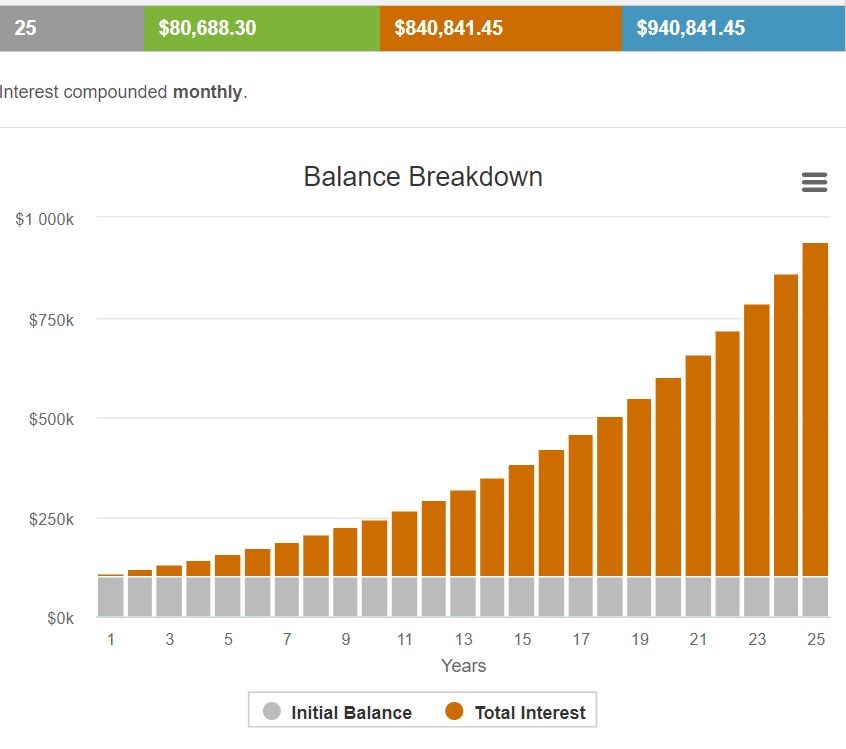 By year 60, it’s grown to more than $21 million! You must leave that money alone.

The power of compounding is most effective when you let it work over many decades.

But how can you even get 9% per annum in a low interest world without huge risk, and how can you speed up the process?

Bobby Bonilla got 8% pa back in 2000, but no one is likely to offer that these days.

One way would be to invest directly in development projects, such as Build to Rent in Australia, which can return 15% per annum plus, but of course you need substantially more capital (Usually $750K- $1 million) to get involved in these private equity projects, unless you just put the money into a REIT or property fund, but it is highly likely after fees you will get less than 5% per annum.

Another way, which offers low risk and high returns would be to invest in property directly.

But rather than imagine what could happen in the future, let’s look at what has happened in the past.

The data is indisputable. Over the last 35 years, the market has continued to climb higher. And that’s despite crashes, wars, and pandemics.

So here’s my simple strategy for success in the Aussie property markets: Buy and hold.

Today, the success in the Australian property market can best be defined by sustaining your ownership. The key is to buy a trouble-free property that can sustain itself over a long period of time.

By taking the long-term position, it can mean almost guaranteed wealth.

Security goes hand in hand with the patient and long-sighted pursuit of accumulated wealth.

It is an endeavour that cannot be hurried without risk.

RELATED: CASH IS KING: Imagine you have two children, twins, David and Dianne. On their 21st birthday, for their present you give each of them enough cash to place a small deposit on a home in Australia.

David uses the money to buy a house, which he rents out while he lives with his mates. He never makes any further investments, and never saves any money, preferring to spend all his money on going to the pub, restaurants, traveling and on himself.

Diana on the other hand is a great saver! She in fact starts to save out of her paycheck a monthly amount, which she adds to the lump sum you gave her.

Due to her conservative nature, and the worry about losing her job, she thinks it better to leave the money in the bank, where she manages to get a decent 4% annual return, tax free, which she re-invests every year.

Fast forward. Who made the most?